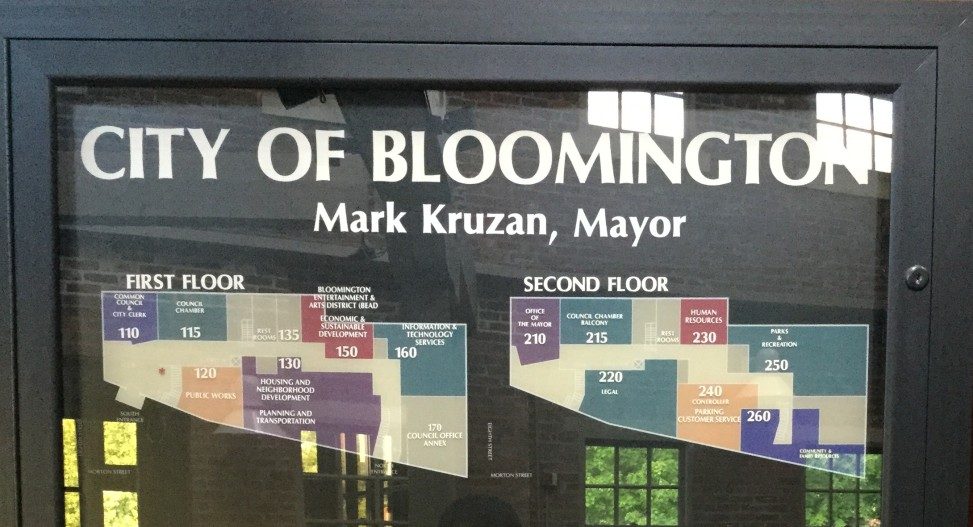 As a student of local governance, I attended two city council meetings in the state of Indiana, USA. This synopsis is to share my experiences of witnessing American local governance and its people.

The first meeting was for the city of Bloomington, where I am living these days. Bloomington has a population of 80,000 and is considered a university town i.e. a town which exists because of a university. The local government is formed as a municipal council with Mayor as the executive head. The council consists of a certain number of councilors who act as legislators.

The other city, Nashville Indiana, is a small city with just 800 residents. The government is organized as a commission where councilors are elected and they choose a president among themselves.

I am sharing three features from my experiences:

Riding with the Mayor to attend City Council Meeting

I entered the Bloomington City Office to attend the council meeting and found out that the venue had been changed because of renovation. That was the last bad experience of the day. While figuring out the new venue and how to reach there, a person found me and said he will arrange something for me to get there. That person turned out to be the Deputy Mayor and the arrangement he made was a ride with The Mayor!

Mayor Kruzan, serving this post since the last 12 years, was about to leave for the council meeting and offered me a ride. I had not expected this simplicity and generosity from a Mayor.

The council meeting was nothing I had attended before. The meetings are open to the public, schedule and agenda mentioned online. Moreover, Bloomington webcasts and archives all meetings on its website.

I found the meetings thoroughly professional. The staff gave the visitors copies of the meeting agenda and the ordinances to be discussed. In Bloomington, there was a healthy Q&A between the Mayor and the Council, although everyone belonged to the same political party.  All the speakers demonstrated knowledge about local issues.

Council members before the meeting

Visitors are allowed to speak separately on issues that are not on the agenda, to bring specific issues to the attention of the Council. Three out of around twenty visitors spoke on different issues and two other thanked the Council for accepting the legislation that day. Some of the visitors had come to witness the Council passing an ordinance on ‘Protected Classes’, applauded when the ordinance was passed and left thereafter.

The Authority with Local Government

The local governments were pretty strong and a variety of subjects came in their mandate. The power to make laws locally is so extensive that residents of an area can come together to declare themselves as a city. This gives them the power to form a local government and get all the benefits a city gets. The residents and local government can change the form of government, break into two cities, and do lot more.

In Nashville, the city council decided to change the zoning of a small piece of land. It changed a semi-industrial zone to a full-industrial zone. I would wait for the day when local governments in India have the authority over such matters.

In the coming days, I hope to learn more from American governance structures and share the experiences.

Please visit the resources below to get a feel:

Sample Ordinance after it had been passed

Sample agenda for a meeting

Archived recordings from the meetings