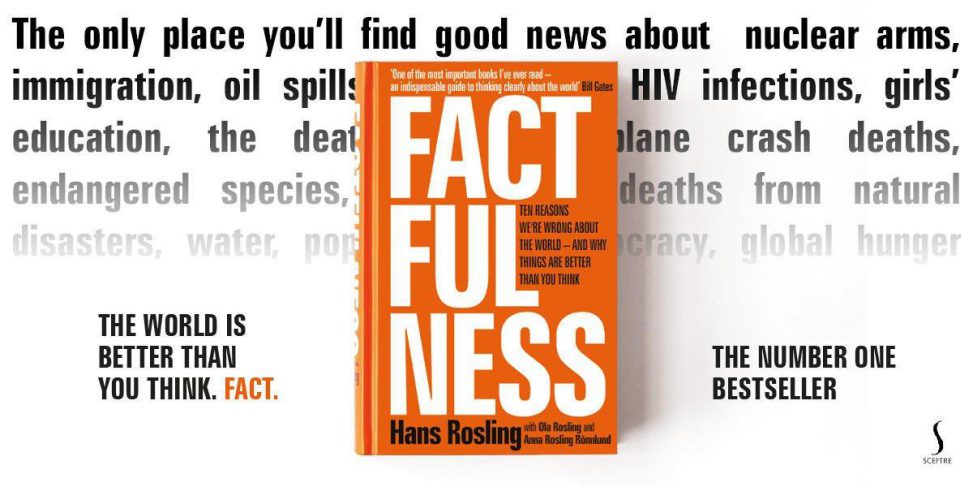 Factfullness – ten reasons we are wrong about the world

Hans Roling in this book get our facts right, perspective sorted and imagination positive.

The numbers, the facts, the data would blow your mind if you always believed that the world is a mess. There is growth, there is progress, the numbers are huge but definitely lesser than before.

The way Hans portrayed is very intriguing. He checks our obvious thinking by throwing a regular quiz, then he questions our reasons for that number and shows a whole new perspective to understand the world.

It is a must-read for anyone who is working in the development sector or gets immensely influenced by the media.

“Last year, 4.2 million babies died. That is the most recent number reported by UNICEF of deaths before the age of one, worldwide. We often see lonely and emotionally charged numbers like this in the news or in the materials of activist groups or organizations. They produce a reaction. Who can even imagine 4.2 million dead babies? It is so terrible, and even worse when we know that almost all died from easily preventable diseases. And how can anyone argue that 4.2 million is anything other than a huge number? You might think that nobody would even try to argue that, but you would be wrong. That is exactly why I mentioned this number. Because it is not huge: it is beautifully small. If we even start to think about how tragic each of these deaths is for the parents who had waited for their newborn to smile, and walk, and play, and instead had to bury their baby, then this number could keep us crying for a long time. But who would be helped by these tears? Instead let’s think clearly about human suffering. The number 4.2 million is for 2016. The year before, the number was 4.4 million. The year before that, it was 4.5 million. Back in 1950, it was 14.4 million. That’s almost 10 million more dead babies per year, compared with today. Suddenly this terrible number starts to look smaller. In fact the number has never been lower.”